Many people are drawn to the trucking industry because it pays a decent salary for a job that doesn’t require much in the way of training. Unfortunately, what many people don’t immediately realize is that this attractive pay rate stems from the fact that semi-drivers often have to be away from their families for weeks at a time and work insane hours.

This leads to a multitude of health problems including depression due to their lack of family and social connections, obesity because of eating on-the-go fast food options and fatigue from working long hours with infrequent breaks.

For semi-truck drivers, things like resting and stopping to eat, are often luxuries that they simply cannot afford. They are often under a great deal of pressure from their employers to make their deliveries on time, and that often causes them to make questionable driving decisions.

In 2014, 78% of fatalities involving trucks were from tractor trailers. Drivers in the study cited various reasons for the crashes, and while you could very well die in a car crash as well, there’s one major difference with a semi-truck. They’re enormous, and that makes the risk of multiple people being injured in a crash that much greater.

What causes semi-truck drivers to become an accident risk?

There are several factors that make semi-truck drivers a serious risk on the road, but the most important one is their scheduling. There are, of course, laws in place which are supposed to protect the general public and the drivers themselves, but even with these laws in place, the reality of the situation is pretty grim.

Trucking companies are allowed to schedule their drivers to work 14-hour days as long as they only spend 11 hours behind the wheel. While this is better than having no legislation at all, that’s still a long time to be driving without a break.

The National Highway Safety Administration estimates that up to 6,000 deaths may occur each year due to drowsy driving. Many truck drivers frequently drive while tired or sick in order to keep their employers happy and to secure their livelihood.

However, many them are also inexperienced. Large truckload carrier turnover rates have jumped to 94% in 2018. This gives the trucking industry an influx of young and inexperienced drivers who may already be at a higher risk for accidents.

Though you also can’t ignore the part that other drivers may play in these collisions. Semi-trucks don’t have the same maneuverability that a car does, and if a sedan decides to cut off a trucker, the ripple effect could cause life-threatening injuries to everyone in the immediate area. Tractor trailers are top heavy, and they can roll over very easily if the driver needs to make sudden evasive maneuvers.

What should you do if you’re involved in a semi-accident?

If you’re involved in an accident with a semi-truck your first step should be to make sure that your passengers are okay. If your vehicle has come to a stop in the middle of the lane, then you may want to consider moving yourself and the passengers to the side of the road for safety. It’s entirely possible that cars behind you might not stop in time and hit you again.

However, if you or your passengers are injured this may not be an option. Anyone who has a spinal injury should not be moved for safety reasons. Instead, move the vehicle to the side if it’s drivable and put on your hazard lights.

Your next step should be to call for the paramedics and the police. They’ll be able to close the road and assist anyone who has been injured in the crash.

Even if your vehicle is drivable, you should never leave the scene of an accident until the police have arrived and have cleared you to go. Even if the accident was not your fault, you’ll need to stay and speak to the police.

Without a proper police report, you could be denied damages for your vehicle or injuries by the trucking company, even if the truck driver was at fault. Trucking companies have very good lawyers, and you’ll need the police to help you collect evidence for your case.

In addition to the police report, you’ll also want to collect drive logs, copies of the equipment inspections, statements from any witness and photos of property damage and injuries which were caused by the wreck.

Once everything has been squared away, you’ll want to find a lawyer to represent your case. It’s easy to do this by using a google search such as “Tractor Trailer Injury Attorney Aurora”. Just insert your town or city and you’ll be able to find the best 18-Wheeler Accident Lawyer in Aurora, or whatever city you call home.  If you are located in the Denver Metro Area, contact AGG Law Firm for a no-cost consultation. 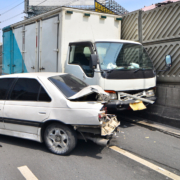 How To Navigate A Car Accident Involving Commercial Trucks
0 replies

Getting Your Rightful Dues: The Difference Between Personal Injury and Catastrophic...
Scroll to top